The Population Registry of the city of Poznań from 1870-1931

The Poznań Population Registry is a priceless source of information about people living both permanently and temporarily in Poznań in the years 1870-1931. It's stored in the Poznan City File, which is a resource of the State Archive in Poznan. In order to meet the growing interest of researchers and genealogists, the State Archive has undertaken a comprehensive digitisation and compilation of the information contained in the File.

The History of the Registry 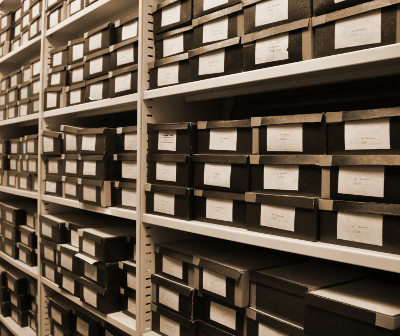 The Registry was established by the Police Presidium in Poznań in 1870 and ran until 1932. The collection consists of 1091 archival units in the form of boxes, each containing between approx. 850 and 1000 cards. The cards were issued to all the residents of the city who registered for permanent or temporary residence during that period. The cards both for individuals and families contain names, occupations, dates and places of birth and subsequent addresses of residence. The cards often contain also additional information about the date and place of marriage, death, military service, time and place of stay in the city. Registry is very helpful source used by authors of various dictionaries, lexicons and monographic studies. It can also be used for works in the fields of demography, sociology, cultural history, genealogy, etc. The file has a unique value, because often only on the basis of its contents one can determine important facts from the biography of an interesting individuals.

Despite the great value of the content, the data contained in the File should be treated as a auxiliary source of information about the persons recorded in the registry. Sometimes the dates or places of birth are different from those in the birth records. It should also be taken into account that the entries were made until the end of WW I by German-speaking Prussian officials, hence it is possible to distort the names of towns and villages, especially those outside the borders of Germany at that time. Despite these imperfections, the data contained in the Cards will make it easier to locate the place of origin of persons or families, as well as to reach the original birth and death certificates.

What information do the registration cards contain?

Digitisation in the State Archives in Poznań

The State Archive in Poznan, which preserves more than 14.5 kilometers of current records (collected in about 1.2 million archival units), stores exceptionally valuable and unique historical sources depicting both the history of Poland and the development of European civilisation. Approximately 1,700 users use the Archive resources annually on average, visiting the site more than 5.3 thousand times a year and renting about 55,000 archival units. Thus, only about 5% of the resource is made available in the traditional form every year.

The State Archive in Poznań, as one of the first entity in Poland, started digitizing its own resources already in 2006. With the aim of intensifying the actions initiated earlier, in 2011 State Archive joined the Kultura+ Programme which was announced by the Minister of Culture and National Heritage. Within this framework, by 2015, the Population Registry and civil records from Wielkopolska area from the 19th and 20th centuries were planned to be scanned.

The above decision results from the fact that the number of users and archives available for genealogical research is increasing year by year. The amount of browsing archives for these studies accounts for around 60% of the total number of renting. This is sufficient reason to take additional steps to facilitate access to such sources for more researchers. Therefore, the plan to intensify the digitalization of the registry of Poznań residents and civil records was undertaken.

In 2011, the State Archive carried out about 100,000 scans in the Kultura+ project, while in 2012 it was already about 250,000 scans. In 2013, the Archive completed the third stage of a very important scientific and genealogical community called "Continuation of the project to digitise the Wielkopolska population registers in the 19th and 20th centuries", which included more than 279 thousand scans. In the years 2014-2015, approximately 600,000 scans were made available. The parent copies are successively transferred to the central repository of the National Digital Archive and then posted on the Internet in the public www.szukajwarchiwach.pl webpage. Taking into account the number of scans performed under the Culture+ Programme and due to planned statutory tasks, almost 1.22 million cards from 1091 archival units were digitised. It is worth mentioning here that at the end of 2013 a total of 6.3 million scans are available in the public domain - at www.szukajwarchiwach.pl, www.wbc.poznan.pl and cyryl.poznan.pl (they include civil registrars, municipal and guild records). The physical sources of these scans are stored and preserved in the warehouses of the State Archive in Poznan as well as its regional branches in Konin and Gniezno.

It should also be particularly emphasized that apart from digitisation of archival materials, the Archive as part of the Culture+ programme, in 2013 started the process of indexing the population registry of Poznań. More than 1 milion personal cards (from letter A to letter Aw) have been indexed and provided in the Internet. Specially designed search engine for indexed part of the file is available at: http://e-kartoteka.net. Thanks to this database, the search time for specific persons has been shortened many times. This will certainly result in an even higher access of using the registry and will increase its value among users.

Due to the growing interest in the e-kartoteka servoce on the one hand, and the progressive indexation on the other, in 2017 State Archive in Poznan developed and make available data in the form of a new website with new search engine together with links to photos on the NAC website.